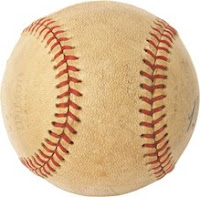 One of the commissions I am currently working on is an oil painting for a fan of "The Brooklyn Dodgers."  I will be switching back and forth between several paintings in progress on my blog posts to come.   One of the commissions presented some exciting challenges for me.  I was provided with a few specific objects that were to be in the painting if at all possible, which I will reveal later.  Since my specialty is painting "realistic birds" in each of my still life works, we had to come up with just the right "bird" for the "Brooklyn Dodgers" painting.  ( The Catbird )

"Red Barber" was a very famous American sportscaster and he was primarily identified with radio broadcasts of Major League Baseball.  "Barber" became famous for his signature catchphrases, like:

"Sittin' in the catbird seat" – used when a player or team was performing exceptionally well. It means sitting pretty, like a batter with three balls and no strikes on him.

So my first challenge was to find a "catbird" for reference.

During my research on "catbirds" I came across this image:  This photograph is not mine, but it was so cute I wanted to share it with you.  I am sorry I don't know the source, but he has a great sense of humor.

There really is an American bird called the "catbird", a member of a group called the mimic thrushes that also includes the mockingbirds and thrashers, all of them — as their group name suggests — skilled at imitating other birds, animals, and even telephones and other noises. The American species is strictly speaking the grey catbird, which lays the most beautiful turquoise eggs. It’s called a catbird because one of its most impressive imitations is the mew of a cat.
Catbird seat (as it is usually written)  meaning to be in an advantageous or prominent position, one of ease and favour.
(I found that information and this image on Wikipedia)

A "Catbird" is one of the important things to be painted in this painting.

My client also requested that his vanity plate "Dem Bums" also be included in the painting.  His original "Brooklyn Dodgers" baseball cap was also provided to me to photograph.  My challenge is to incorporate each of his objects into a nice balanced painting. 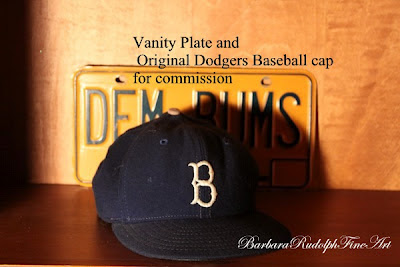 The "Dodgers" were called "Dem Bums" (a term of endearment in Brooklyn).  Yankee Stadium was where innumerable "Dodgers" hopes were too often dashed. 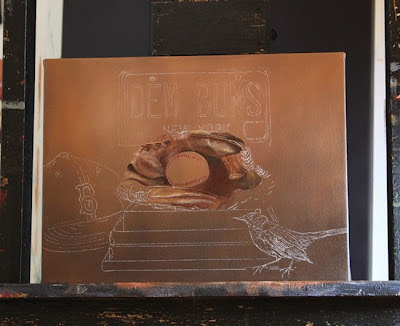 I have just started here

After I took about 100 different photographs of my clients items, I decided upon the composition.  The background medium tone is painted in here.  This background will change as the painting develops.  The "Dodgers" baseball cap I didn't think would fit in my composition, however it was important to my client.  I have decided that it will be in dark shadow, so that I can maintain a nice balance in the painting.  Thus...the background colors will change.

Here is a little history:

The 1955 World Series matched the Brooklyn Dodgers against the New York Yankees, with the Dodgers winning the Series in seven games to capture their first championship in franchise history. It would be the only Series the Dodgers won in Brooklyn (the team relocated to Los Angeles after the 1957 season). 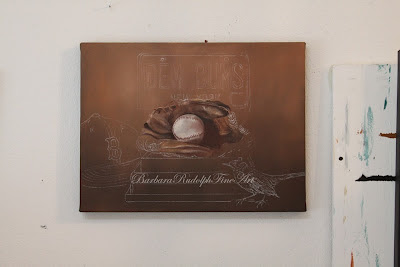 I would love to hear your comments.  Just click on the "comment" link below to leave one. 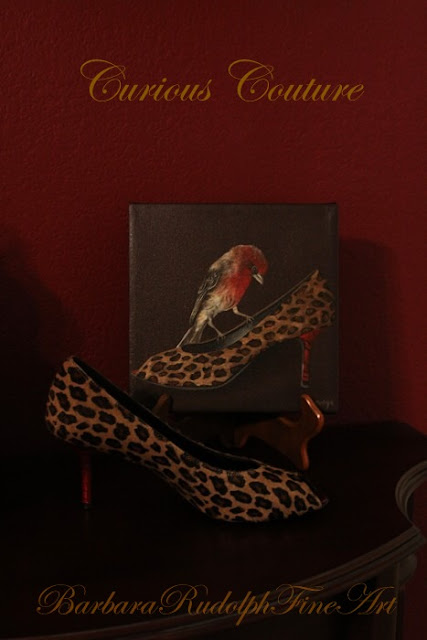 
At my last art show, I had a fun request to paint a client's "couture" animal print "shoe."  She brought in her shoe and asked me to paint a little "bird" in it that had red.  I am always taking photographs of my backyard birds and I snapped a cute shot of a little "house finch."   The little "bird" had a curious look in this particular pose, so I decided it would be the one to paint from.  After priming my canvas and painting in the background color, I sketched in the bird and shoe, and then began the painting. 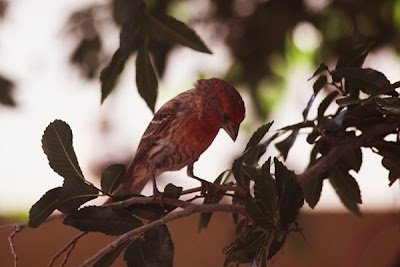 This is my photograph of the "house finch" that I worked from. 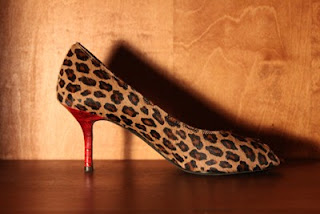 This is my clients lovely Italian "couture" shoe 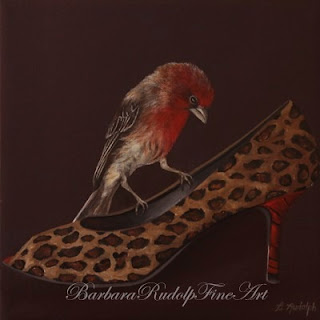 This is the oil painting "Curious Couture" all finished!


This was a fun little painting to do.  Now I have to get back to work on my "sports" related paintings.  I have lot's of commissions to do that will keep me busy for a while.  I hope to post some in-progress shots of the new realism paintings soon.
Barbara Rudolph
PaintingBirds.com
website
email
Posted by Barbara Rudolph Fine Art at 5:45 PM No comments: