This was a nice little surprise the other day to see on "Larry Brooks" website.  His website storyfix.com  was voted the number 1 writers blog for 2011.   He really liked this painting of mine and was kind enough to write something about it and to link my website onto his. 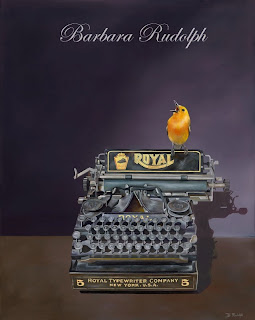 "Tell Me A Story"
30 x 24" Oil Painting on Canvas
Giclee Limited Editions available too
I enjoy painting my "birds on books" in many of my still life paintings.  I think the art of writing is the "true art" I just paint about it.  Please contact me if you would like to see your book painted in oil.
You can visit his website and see the post here:
http://storyfix.com/the-art-of-writing-framed
Barbara Rudolph
email me
my website
Larry Brooks Website
Posted by Barbara Rudolph Fine Art at 8:53 AM 2 comments: 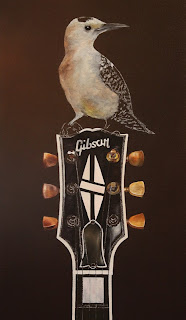 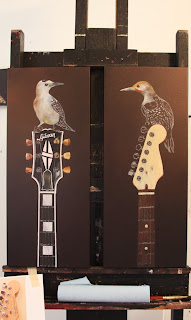 Both paintings on my easel in-progress
A﻿s I explained in an earlier post, I have been working on a fun commission of two paintings.  One is of a "Les Paul" Gibson guitar neck and the other is of the "Fender Stratocaster."  These are considered "rivals" in the "guitar" world and since I love to paint "birds" I had to include "rival" birds.  The "Gila Woodpecker" and the "Gilded Flicker."  Each canvas is 24" x 10" and is being painted in oil.  There are many challenges to this, since the keys on the "Gibson" for example are gold.  It is taking me many layers to capture the wonderful light reflections on the keys.  I have to allow each under layer to dry first, so it is a bit time consuming.  I am looking forward to getting the next layer of color on the birds.  It will really start to take shape then.   Stop back again soon to have another look.
If you are wondering how I got this commission.  It was at my recent Celebration of Fine Art show in Scottsdale.  I was painting a classic "Rickenbacker" guitar with little hummingbird on top of the neck.  I call it "Little Ricky."  My client happened to be at the show that day and noticed it and had the idea to have two of his favorite guitars painted with two of their "rival" backyard birds.
Here is a picture of "Little Ricky" which is available for purchase.

I am taking a little detour today from posting my paintings in progress to tell you about a very special studio and gallery I visited yesterday.   Artist "Jim Sudal" is very well known in the Southwest for his desert inspired ceramics and pottery.  His work reflects the beauty of the desert landscape through vibrant, garden-inspired colors and well known imagery such as prickly pears, blooming aloes and the "agave" which is his signature design.
His studio and gallery/store is right downtown in the Scottsdale Arts district.  He has been there four years now and I finally made my way in for a visit.  I was so impressed with his gallery and beautiful and very unique ceramics that I just wanted to share with everyone.  If you are in the area be sure and stop in to see it.  You will most definitely find a treasure or two to take home with you.   (I did)
He is located at 7037 East 1st Avenue, in Scottsdale.  Jim also does large installation pieces for clients like "Muhammad Ali."  You can visit his website to see the images of these very special designs in the homes of his clients.   See his website:   http://jimsudalpottery.com/ 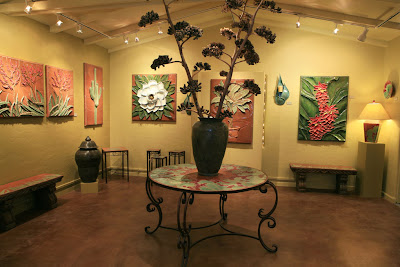 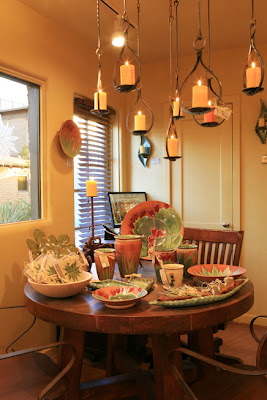 I have been working hard on a recent commisson of "rival guitars" with "rival birds"   My client collects guitars and asked me to paint two of his favorites, the custom"Gibson Les Paul" and the "Fender Stratocaster."   These are considered "rival" guitars in the guitar world, and he thought it would be fun to have me paint "rival birds" on the necks of these two guitars.  He chose the "Gilded Flicker" and the "Gila Woodpecker" because they are always fighting it out at their bird feeders.
The "Gibson Les Paul" is truly one of the giants.  It was inspired by Lester William Polsfuss (Les Paul) in the 1950's.  It has been used by practically every rock star since its conception.  It is not the oldest electric guitar, but is definitely one of the most famous in the world.
The "Fender Stratocaster" was developed in 1954 and is a favorite of many musicians including Jimi Hendrix, who had his 1969 Woodstock Strat auctioned off for a record $270,000 in 1990.  It has a maple neck and comfort contoured Alder body that has achieved classic status.
Below are some examples of the two types of birds that I will be painting clinging to the neck of each guitar.  I have also attached a couple of the idea sketches.  I will post images of the paintings in progress as I go.  Check back to see them as I will be working on them all month.
﻿﻿
﻿ ﻿﻿ ﻿
﻿﻿﻿ ﻿﻿﻿﻿ ﻿﻿ ﻿﻿﻿
(My preliminary sketches are above)
Barbara Rudolph
email
my website﻿﻿
Posted by Barbara Rudolph Fine Art at 10:30 PM No comments:

Desert Bontanical Gardens.....Butterflies.... and a quick look into spring

I went to the "Desert Botanical Gardens" the other day to photograph some birds and plants.  Here are a few of the photographs I took.  (You can double click on the images to see a larger size picture.)
﻿﻿
﻿﻿

Juried Member of the "International Guild of Realism"

A couple of weeks ago I was officially invited to become a member of the "International Guild of Realism."  I am very excited to have been accepted into this group which has such an excellent reputation of high quality art and professionalism.

IGOR strives to educate the art world concerning the latest developments in "Realism" through articles, museum lectures, and promotional activities.  The group also organizes individual as well as traveling museum exhibitions to expose it's members to a wider public, and to help set a standard for the genre.   It is very exciting to have the opportunity to participate in invitational "Realism" exhibitions and other art projects.
You can click on the link to the  International Guild of Realism  to view the artist members and to read more about this very special group.
Barbara Rudolph
email
website
Posted by Barbara Rudolph Fine Art at 8:31 AM 2 comments: